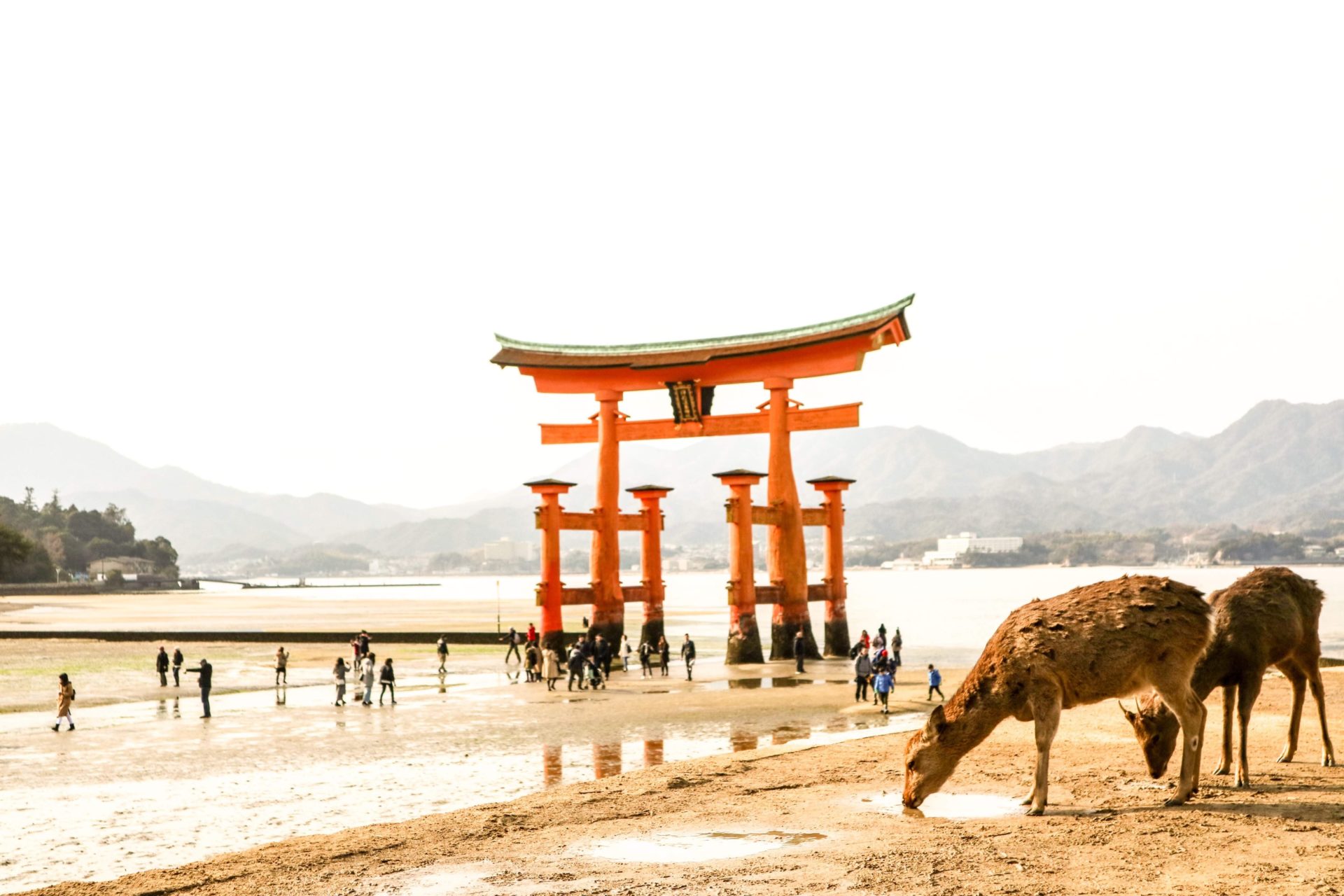 Do you know why Miyajima Island is so famous with tourists? Yes, for the floating torii gate and Itsukushima Shrine, that’s true, but you are forgetting the cutest symbol of Japan. Yes, we are talking about deer!

But who is this deer really? Why are they all over Miyajima Island? How to approach them? Explanations on this sacred Japanese animal!

Why are there deer on Miyajima Island?

If you travel to Hiroshima Prefecture in Japan, you can’t miss the deer on Miyajima Island!

The Shinto deity who roamed Japan on a deer

It all starts in the 700s with the famous story of Takemikazuchi, the Shinto deity of thunder who travelled on the back of a white deer. He is said to have travelled all over Japan, from Ibaraki Prefecture to the city of Nara. Fallow deer have since been regarded as messengers of the gods.

This Japanese deity is now associated with the Kasuga Shrine in Nara, and a lot of deer live around in the forests.

In the past, people used to offer food to deer in temples. Until 1637, killing one of these deer was punishable by death.

Today, Japanese law protects these animals with less severity. Fallow deer roam freely in the streets and are used to humans. There is still a risk with males, which is why antlers are cut off during a Shinto ceremony in autumn.

Where can I see the deer on Miyajima Island ?

It is not only Nara that is famous for free roaming deer. There are over 1,200 deer on Miyajima Island!

In front of the floating torii gate

You will encounter deer as soon as you arrive on the island. From the ferry to the famous torii gate, you will find them on your way. They roam freely along the beach.

Why not take a picture of them in front of the big red shinto gate? The best time is at sunset at high tide! You will feel as if the torii is floating on the sea. But you can also take advantage of the low tide to venture out into the sand with the deer.

For a great view, we recommend entering Itsukushima Shrine, right in front of the torii.

In the shopping streets

Fallow deer are used to walking alongside humans. During your walk through the shopping streets of Miyajima, they may sometimes accompany you. Be careful if you buy momiji manju, the sweet specialty of the island (they might steal them!).

Take the opportunity to buy a small souvenir of the island: the deer plushies are cute!

On Mount Misen and parks

You will also find groups of fallow deer in the island’s forests, which are a UNESCO World Heritage Site. The maple-covered parks are beautiful, a chance to blend in with Japanese nature.

If you have time and energy, we recommend climbing Mount Misen (or using the ropeway). It is the highest mountain on Miyajima Island. You can enjoy an incredible 360° view of the sea.

Can I approach the Japanese deer ?

These adorable beasts are everywhere! But are they dangerous? Can we touch them?

Can I feed the deer on Miyajima Island ?

You can in Nara city, where some shops sell biscuits that you can give to the deer. But you can’t feed them on Miyajima Island. Beware, you will soon find yourself surrounded. They eat everything they find: food, plastic, paper… We advise you to keep your bags against you because they may try to steal you.

Please be respectful of animals and the environment in Japan

Fallow deer are protected by the local people and by Japanese law. Please be respectful and careful when you come across groups. They are generally very calm but some are fearful, especially those in the forests. If they do not want to be touched, do not force them.